The Vegas Golden Knights are but one win from the Stanley Cup Finals. Yes, the unthinkable is currently happening. The self-dubbed ‘Golden Misfits’ – a team assembled by Manitoban Kelly McCrimmon

– continued to prove itself Friday as quite possibly the greatest success story in all of professional sports.

Led by role-playing Winnipeggers Cody Eakin and Ryan Reaves, quality coaching, and rock-solid goaltending, the Golden Knights have put together 11 wins in the 2018 Stanley Cup Playoffs – one short of the final round, and five short of the Stanley Cup. And on Friday night in front of 17,500 screaming fans at T-Mobile Arena, Vegas collected its sixth home win of the postseason, pulling comfortably ahead of the Winnipeg Jets in the process. 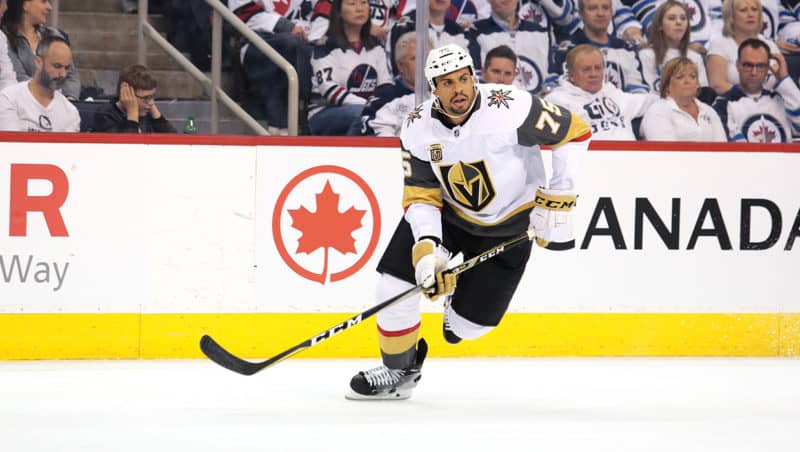 Once again, the Jets found themselves down a goal less than five minutes into the game. Although battling back with strong second and third periods for the second-straight game, Winnipeg was unable to capitalize late, ultimately falling 3-2 to the NHL’s newest team, putting themselves one game from elimination in the NHL’s Western Conference Finals. 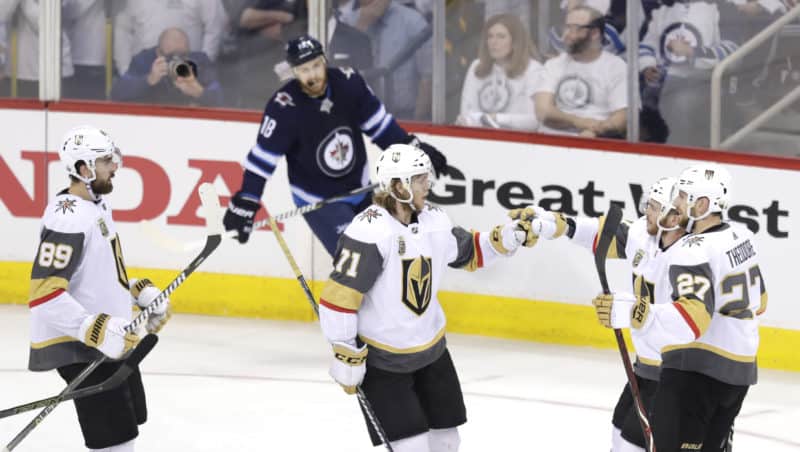 The Karlsson goal came just 2:25 into the opening period. Later in the frame, Mark Scheifele was handed a two-minute minor immediately after Brayden McNabb got away with some serious interference against Winnipeg’s top playoff performer. Scheifele was visibly in distress, spotted with blood pouring down the bridge of his nose. Even after clearly showing his damage to referee Brad Meyer, the Jets remained shorthanded.

Luckily for Winnipeg, the Golden Knights were unable to replicate their earlier power play success with Scheifele in the box. But from missed tripping infractions to interference calls to faceoff violations in the early going, Friday’s officiating crew certainly appeared to have thoroughly enjoyed the overflowing Vegas hospitality prior to game four. 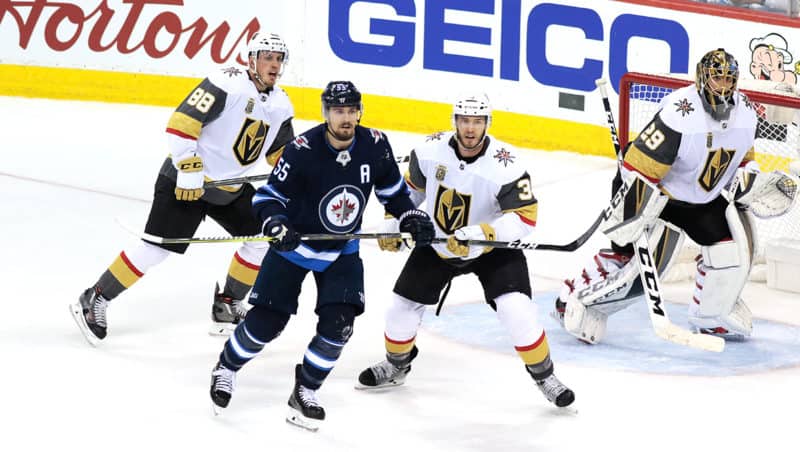 Although trailing on the scoreboard, Winnipeg outshot their opponents 10-9 through 20 minutes. In fact, the Jets maintained their shot lead through the second period as well.

It was also in the second period in which Winnipeg scored its first goal of the game. After finally finding favour in the eyes of the of the referees, the Jets capitalized on a Tomas Nosek tripping minor midway through the frame.

Following some heavy pressure from Winnipeg’s top power play unit, Blake Wheeler slipped a pass back to Dustin Byfuglien at the point. Instead of one-timing the disc to the net, Byfuglien quickly one-touched the puck across the ice to a wide-open Patrik Laine. And in typical Laine fashion, the 20-year-old Finn blasted the first Jets’ goal past Fleury, right from his office. 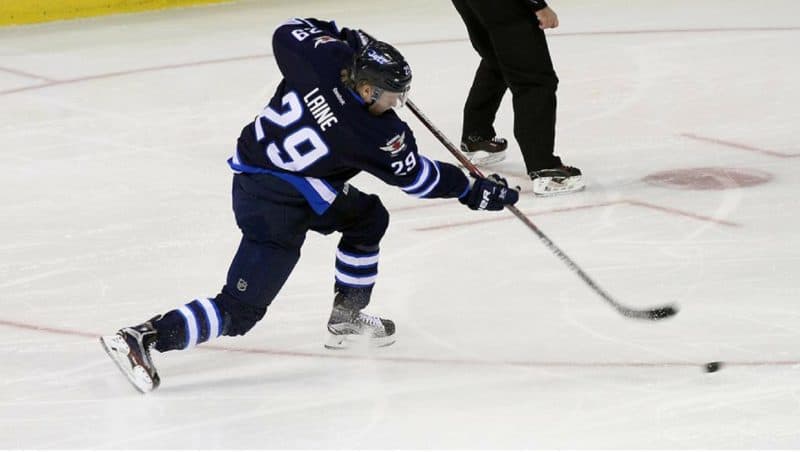 The tying goal was Laine’s fifth of the playoffs, while Wheeler collected his league-leading 18th postseason assist on the setup play.

But much like game three, the Golden Knights stormed right back; the home team even scored in a similar fashion Friday. In the third game it was Erik Haula and James Neal who teamed up on a bad Connor Hellebuyck read to put their mates right back on top of the Jets just 12 seconds after Winnipeg’s game-tying goal.

On Friday it was Pierre-Edouard Bellemare and Nosek, making up for his earlier penalty that had cost Vegas their early lead. Instead of trapping the puck in his glove following a weak Vegas shot, Hellebuyck let the puck squirt out and Nosek jammed in a Bellemare wraparound rebound chance, just 43 seconds after the Laine strike, once again deflating Winnipeg’s sails. 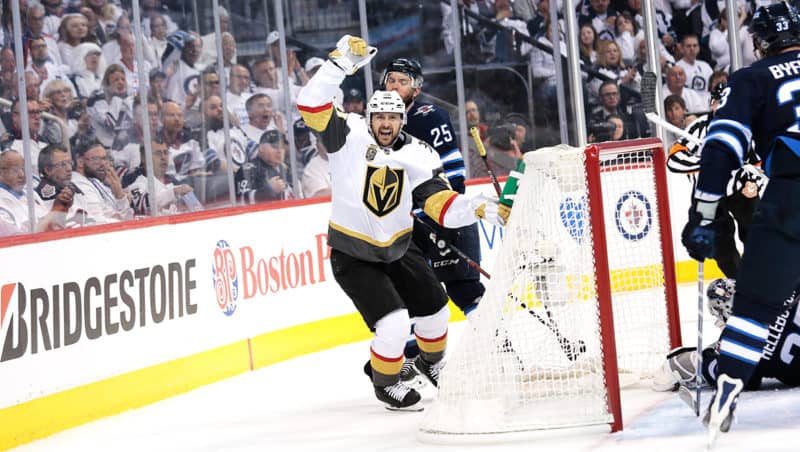 The visitors remained atop the Knights in the shot department after 40 minutes of play, leading 25-22 through two periods of work. Once again, Fleury proved to be the difference, making a handful of key saves for Vegas, both at even strength and shorthanded as the penalties did seem to somewhat sort themselves out in the second period.

After recording the first seven shots of the third period, Winnipeg’s Tyler Myers knotted the game up once again for the Jets 5:36 into the frame. In stepping into a low wrist shot that disappeared behind Fleury, Myers and his teammates didn’t even realize the puck had slipped through the wickets of the Knights’ netminder until referee Dan O’Halloran plucked it from the back of the net. It was Myers’ fourth goal of the playoffs, while Jack Roslovic picked up the lone assist on the play. 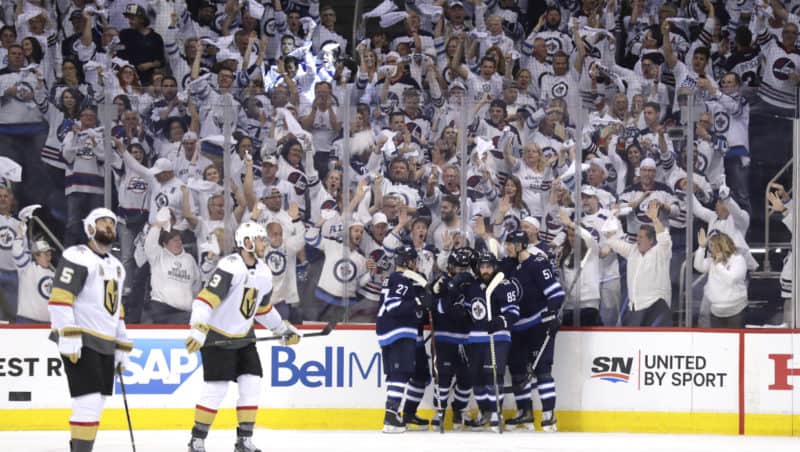 For Roslovic, it was his third assist in his ninth playoff game, as the speedy winger remained in the lineup even with Nikolaj Ehlers returning from Illness. It was Joel Armia who found himself on the outside looking in Friday. David Perron also made his series debut for Vegas in game four. 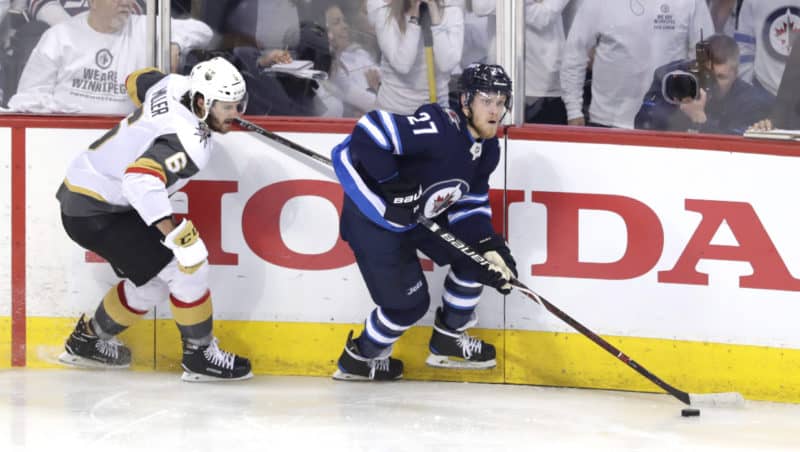 The Jets continued to apply constant pressure in Vegas’ end, stringing together shot after shot, but goaltender Fleury was up for the task, stopping everything after the Myers shot. Vegas caught yet another break as Byfuglien fanned on a one-time attempt from the point. Offensive forward Reilly Smith jumped on his horse and took off after the loose puck, carrying it into Winnipeg’s end before going bar-down short side past Hellebuyck. 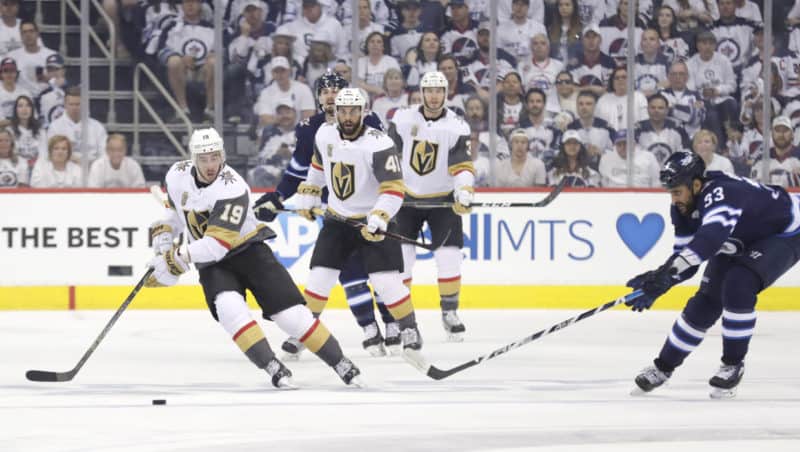 Battling to the bitter end, the Jets were unable to find the twine, falling to Vegas for the second-straight time in Nevada, and third-straight overall – something the Jets did not do in the entirety of the regular season.

Marc-Andre Fleury stopped 35 of Winnipeg’s 37 recorded shots, while Connor Hellebuyck made 26 saves on 29 Vegas shots. The Golden Knights also outhit Winnipeg 45-43 and blocked seven more shots than the Jets Friday. Patrik Laine led the way statistically for the Jets, putting up seven shots, five hits and one goal in the game four loss. 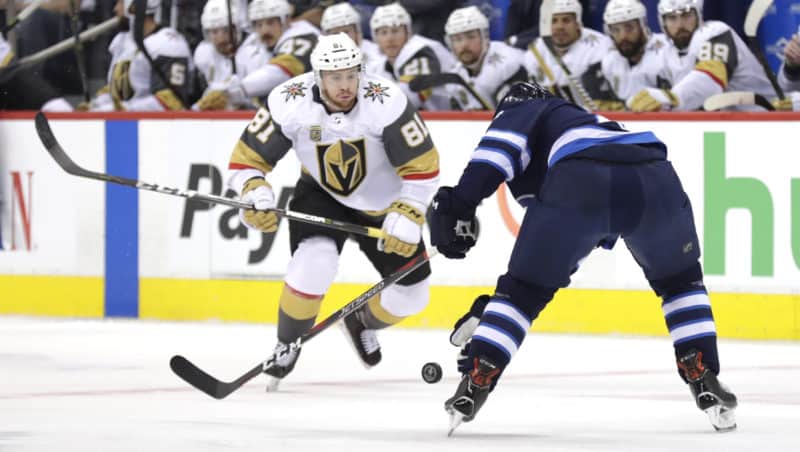 Jonathan Marchessault picked up his ninth assist of the playoffs Friday, giving him 18 points and tying the NHL record for most points in a playoff year in a team’s inaugural playoff run (Jude Drouin, 1975).

The series now shifts back to Winnipeg for game five. Puck drop from Sunday’s matinee is scheduled for 2:20 P.M. central time. The gates to the Winnipeg Whiteout street party open at 12 noon. The game will once again be televised on CBC and Sportsnet. If needed, game six will be held in Vegas, while game seven would come back to Winnipeg.

Game On Free
for 12 Months!