Photos courtesy of Adidas and the NHL

The Winnipeg Jets will have a new look for 2020-21. Well, not an entirely new look, but for select ‘Rivalry Night’ games during the upcoming season, Winnipeg will wear brand-new stylized Adidas ‘Reverse Retro’ sweaters, on numerous occasions throughout the year, in addition to the team’s alternate, third and heritage sweaters.

According to Adidas, work on these sweaters has been an undertaking of upwards of two full years. The colours, hues, stripes, and primary and secondary logos have each been stylized to match an historical reference and design from past years’ sweaters from each franchise. These new threads are expected to be worn during designated rivalry games between long-lasting foes for years to come.

“The adidas Reverse Retro program creates a new formula to showcase the passion of the fans,” wrote the NHL. “The overarching design theme during adidas’ two-year-long process was to mine each team’s jersey archive and team colors, remixing them to create something new and never seen before. With that in mind, adidas created uniquely distinct and desirable jerseys that incorporated inverted team colors.”

Launching during one of the most difficult times for the NHL in its history – from a financial standpoint – these sweaters will be available for purchase beginning December 1, 2020 at adidas.com, adidas.ca, NHLShop.com, NHLShop.ca and all individual NHL team stores. Winnipeg’s Jets Gear store will have these new sweaters for sale both online and in person.

Images from the Winnipeg Jets sweater release are listed below, alongside write-ups from the NHL on each club’s ‘new’ look: Anaheim Ducks (1995): The unofficially dubbed, “Wild Wing” jersey was originally worn in the Ducks’ third season and was their first third jersey. The fan favorite is the only jersey to feature a team’s mascot.

Arizona Coyotes (1999): This is a color swap on the desert scene alternate jersey, which was the team’s first third jersey, with purple replacing original green. This jersey also includes the lizard shoulder patch.

Boston Bruins (1988, 1990): The Bruins old white jersey, worn by such legends as Ray Bourque and Cam Neely in the 1988 and 1990 Stanley Cup Finals, has been given a yellow remix with the bear head logo shoulder patch. 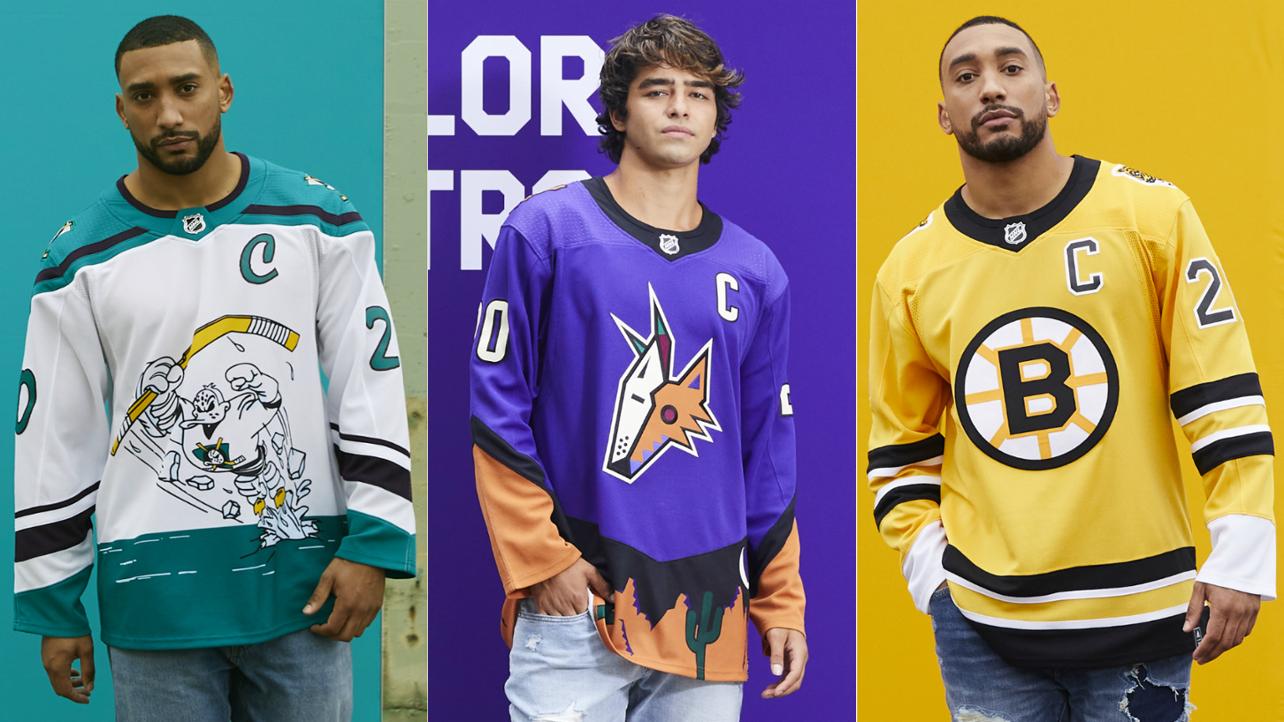 Buffalo Sabres (2000): The original black and red version of this jersey was the Sabres’ first alternate and was the final choice among more than 50 design concepts the team considered. The new version flips it to reflect the current royal blue and gold scheme.

Calgary Flames (1998): The jersey featuring the horse head was the Flames’ first third jersey and the first time a Calgary jersey did not have the Flaming C as the primary logo. A celebration of Calgary’s Western culture, it was the team’s home jersey from 2000-03.

Carolina Hurricanes (1979): The design mirrors that of the Hartford Whalers home white jersey during their inaugural season, but has gray as the primary color, tying together the Whalers and Hurricanes color schemes. The jersey also features the vintage whale shoulder patch.

Chicago Blackhawks (1940): This is a variation on the white alternate design that was worn 1937-55 when the Blackhawks had their famous barber pole-striped jerseys for their primary uniform. 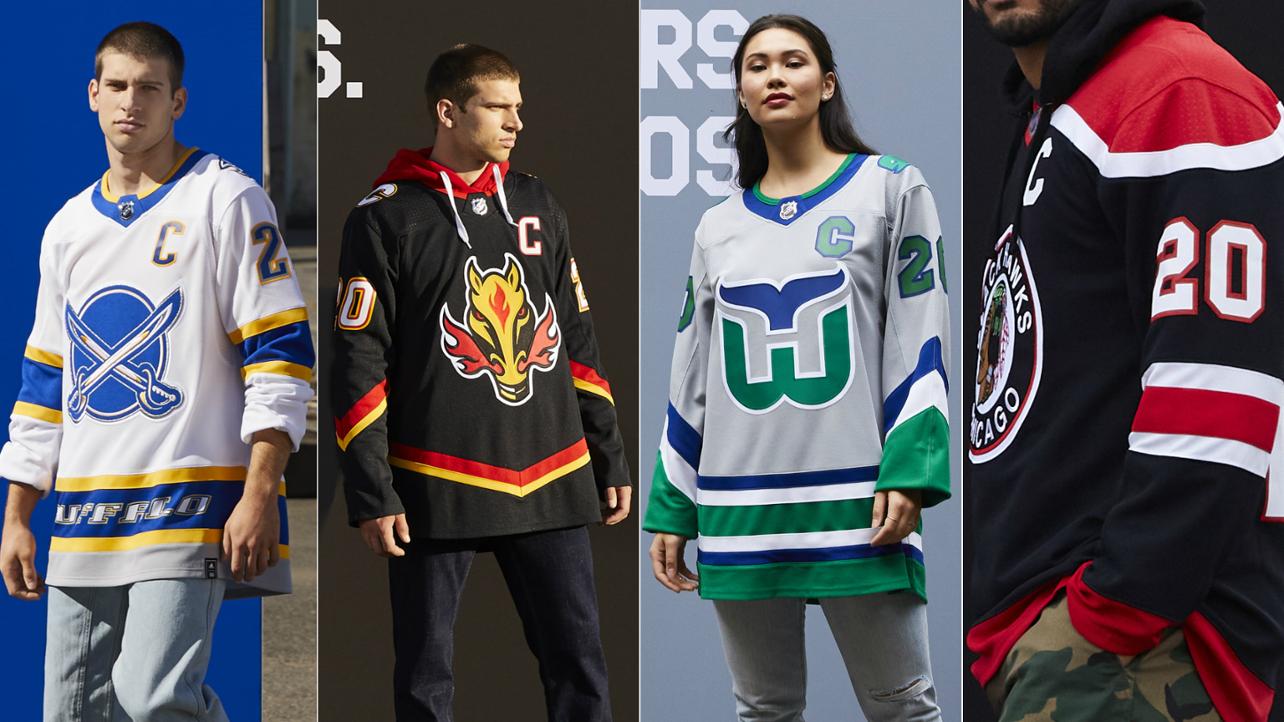 Colorado Avalanche (1979): A true mashup of old and new, this design features the Quebec Nordiques igloo logo with fleur-de-lis in Avalanche maroon. The white jersey is a nod to the Northern Nordiques and snowy Rocky Mountains.

Dallas Stars (1999): The Reverse Retro is an icy-white take on the jersey the Stars wore when they won the Stanley Cup. 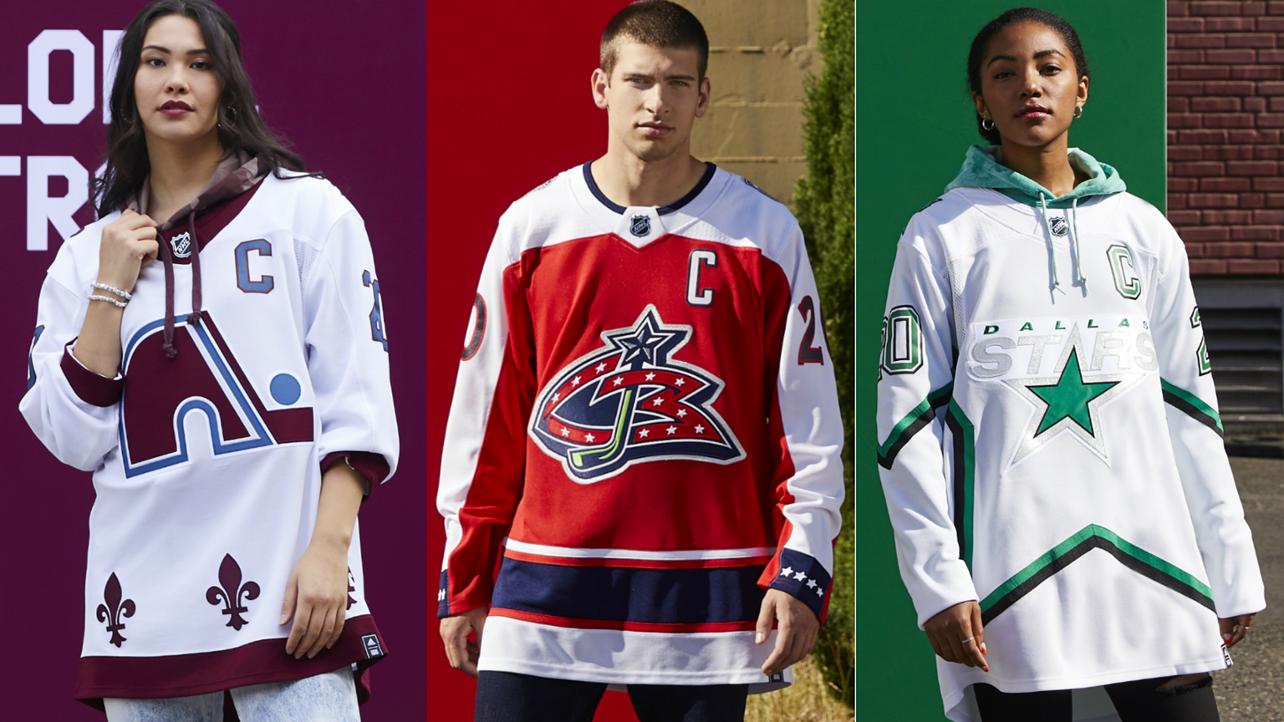 Detroit Red Wings (1998): Inspired by the jerseys worn when the Red Wings won their ninth Stanley Cup Championship and the Centennial Classic jerseys, this design pairs a white base with gray striping.

Edmonton Oilers (1979): These jerseys are a nod to the Oilers’ inaugural NHL season, which was also Wayne Gretzky’s first NHL season. The Reverse Retro is the first Oilers jersey to feature an orange yoke on a white base.

Florida Panthers (1996): This is a throwback to the Panthers’ appearance in the Stanley Cup Final, including the pointed sleeve stripes and palm tree graphics. 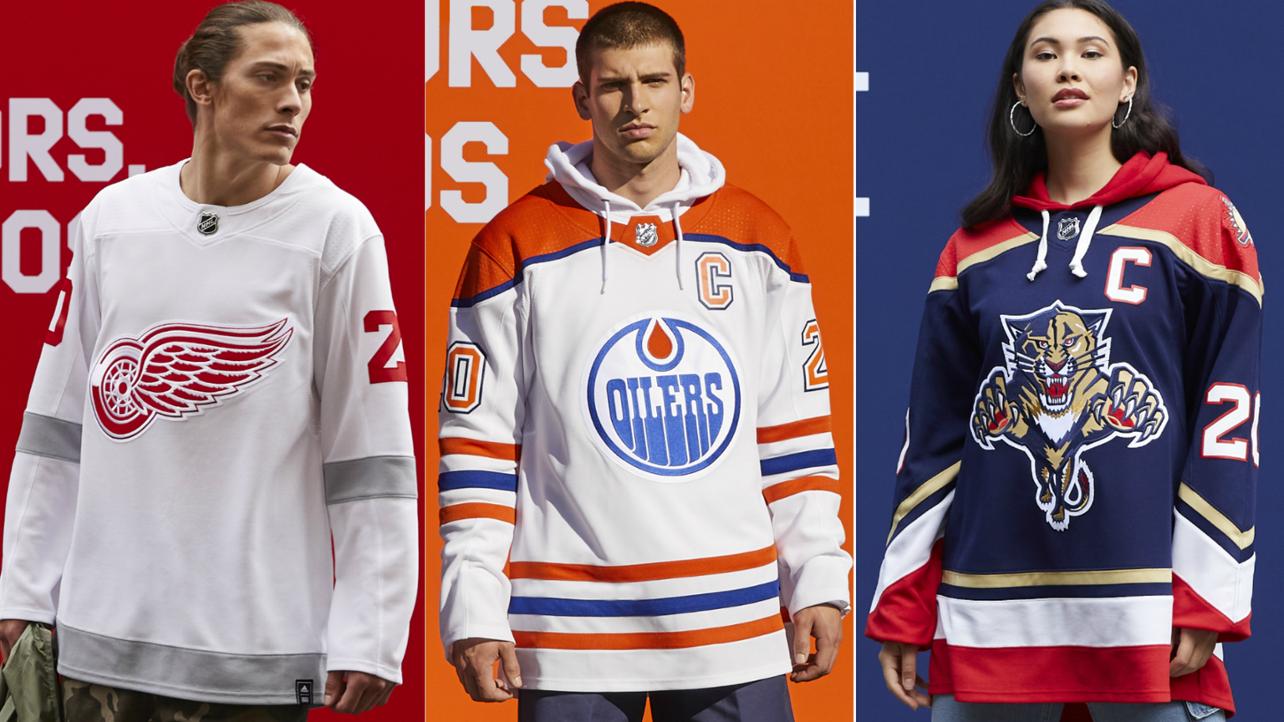 Los Angeles Kings (1989): The inspiration for this jersey was the season Wayne Gretzky became the NHL’s all-time leading scorer. The 1990s era logo is featured in the founding LA Kings Forum Blue and Gold colors that were on the team’s original uniforms in the 1960s and 1970s.

Minnesota Wild (1978): The Wild’s current logo gets a new look with the Minnesota North Stars green and gold, and the drop-shadow numbers.

Montreal Canadiens (1976): Arguably one of the greatest NHL teams ever assembled, the 1976-77 Canadiens served as inspiration for this Reverse Retro, which takes the legendary red jersey and flips it blue. 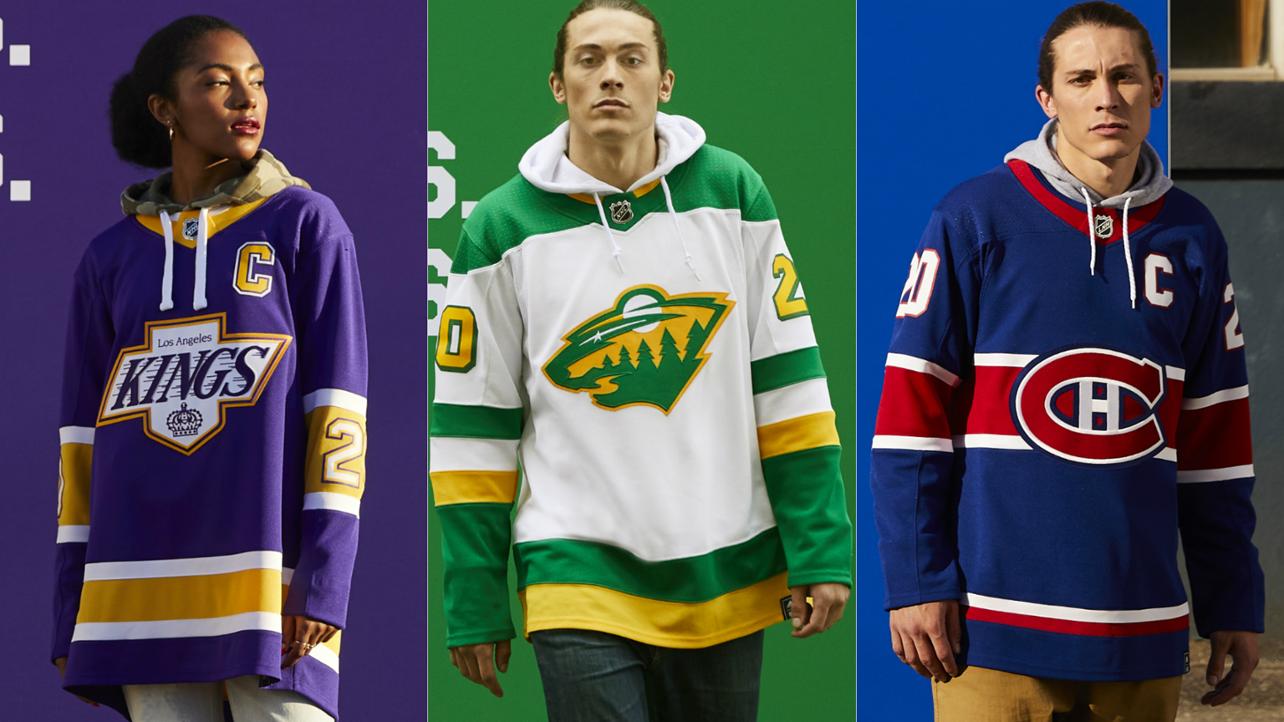 Nashville Predators (1998): The speed nicks in the numbers, striping and crest borrow from the team’s first jersey, while the silver sleeve is a new addition.

New Jersey Devils (1982): The Devils’ original jersey and jerseys throughout their history have featured green accents, but this is the first time they will be wearing a primarily green jersey. The red signifies the mythical Jersey Devil and the green represents the Pine Barrens in which it was said to live.

New York Islanders (1980): The 1980 season was the start of the Islanders’ dynasty and the navy blue color honors legends such as Mike Bossy, Bobby Nystrom, Clark Gillies and Bryan Trottier who wore it. 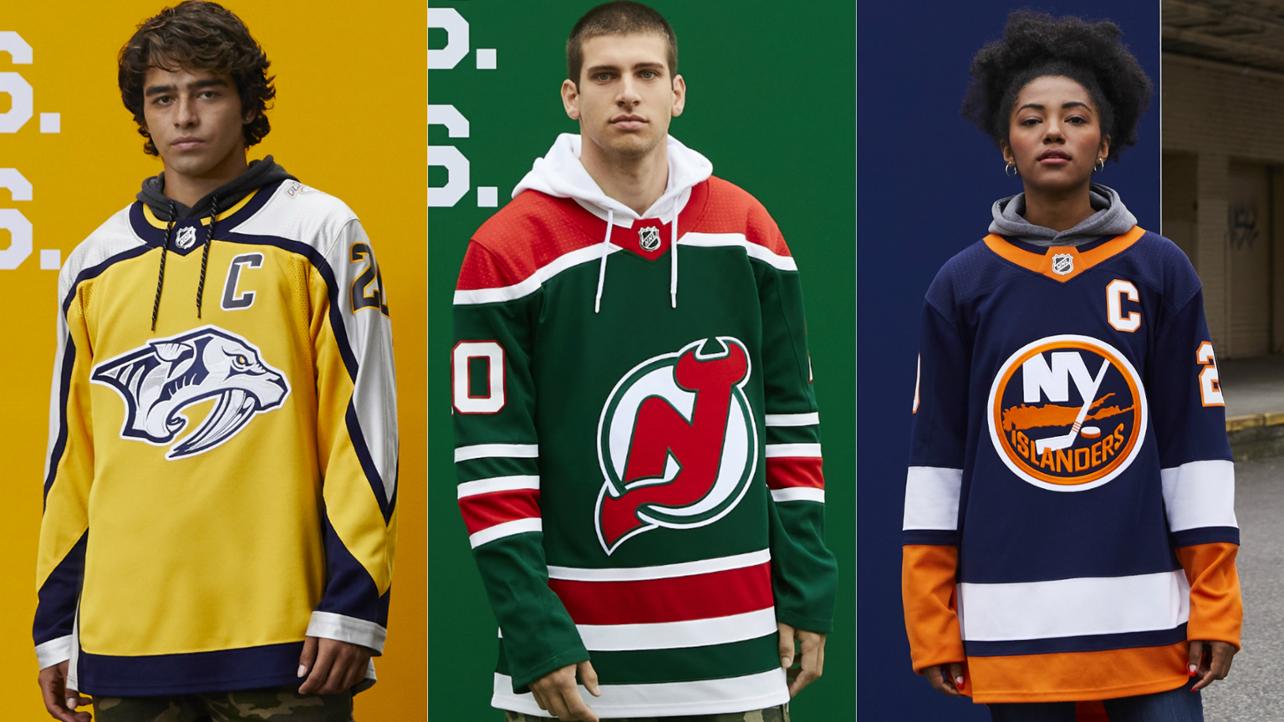 New York Rangers (1996): Lady Liberty is back, 24 years after making her first appearance. The original look has been updated with an all blue sleeve but keeps the silver accents and drop shadow numbers.

Ottawa Senators (1992): The jersey the Senators wore in their inaugural season is updated with a red base to reflect the team’s recent rebranding.

Philadelphia Flyers (1995): The Flyers drew inspiration from the season in which they won the division title and Eric Lindros won the Hart Trophy as the NHL’s MVP. 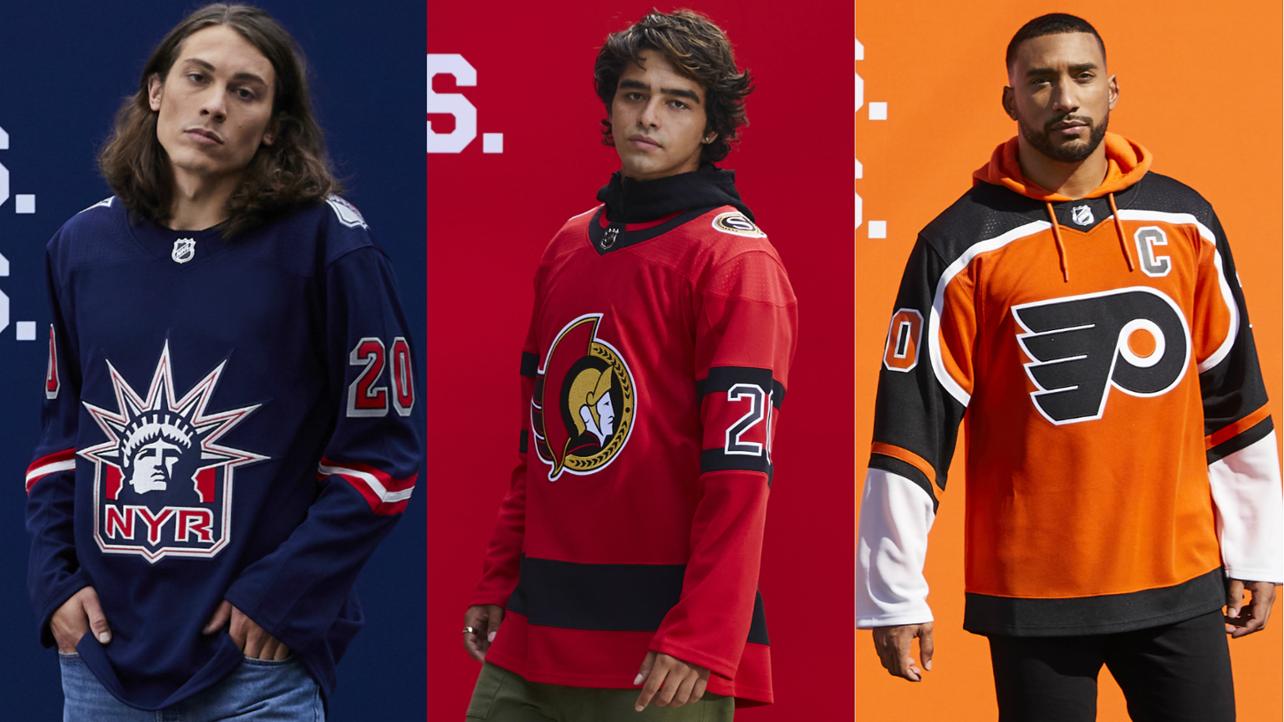 Pittsburgh Penguins (1997): Mario Lemieux won his sixth scoring title during this season, but the biggest cultural impact came from the diagonal lettering jersey he and rapper Snoop Dogg wore in their respective arenas. The Reverse Retro flips the iconic black original to white.

St. Louis Blues (1995): The Blues’ red-bottomed road jersey from the mid-1990s is turned upside down for a fresh take on the look worn by Gretzky, Al McInnis, Grant Fuhr, Chris Pronger and Brett Hull. 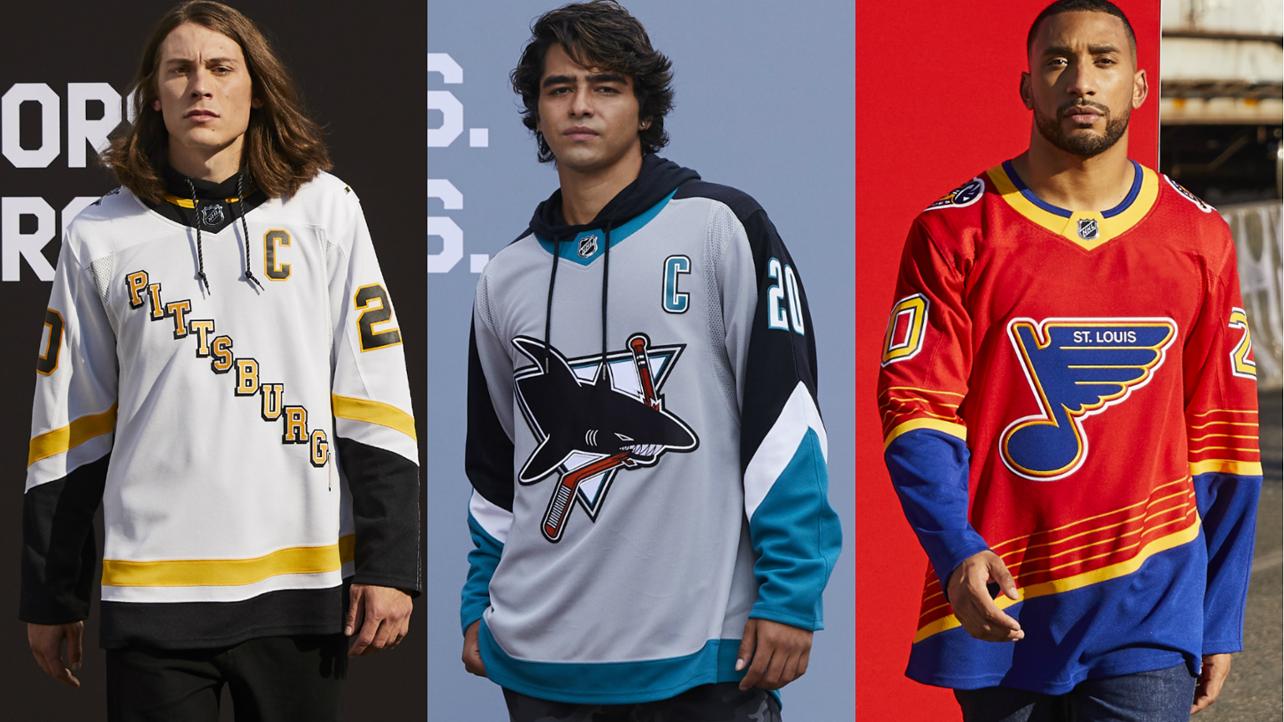 Tampa Bay Lightning (2004): The jerseys the Lightning wore when they won their first Stanley Cup championship in 2004 gets and update with the blue base they wore for their second title in 2020.

Toronto Maple Leafs (1970): The Maple Leafs jersey straddles two seasons with the logo from the 1969-70 jersey and the striping from the 1970-71 jersey. The gray is a nod to the silver that was featured in the Maple Leafs’ Centennial Classic jersey in 2017. 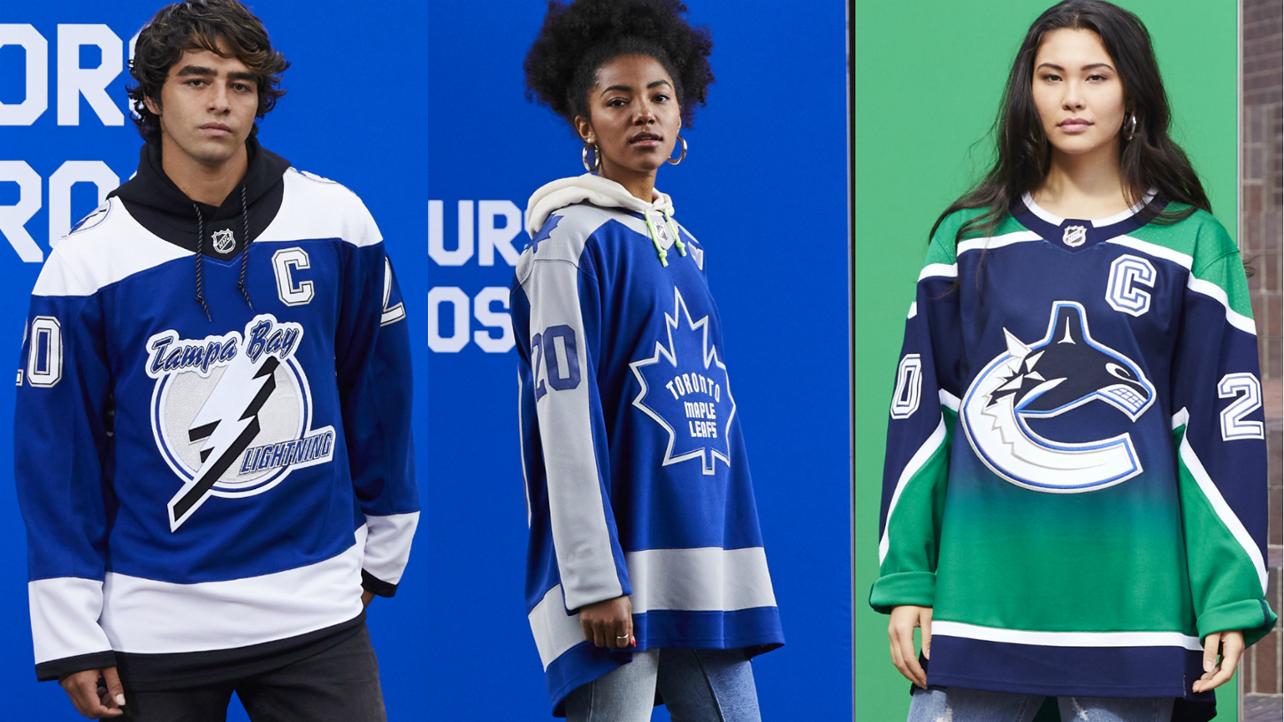 Vegas Golden Knights (1995): Rather than draw from the team’s short history in the NHL, the Golden Knights paid homage to pro hockey franchises that preceded them and paved the way for their existence. Among their inspirations are Manon Rheaume, the first woman to play in the NHL, who wore similar striping as a member of the Las Vegas Thunder of the International Hockey League.

Washington Capitals (1997): The blue, black and bronze throwbacks reminiscent of Peter Bondra, Olie Kolzig and Calle Johansson get an update with the patriotic red, white and blue of the 2018 Stanley Champions.

Winnipeg Jets (1979): The Jets wore similar jerseys in their first season in the NHL. The Reverse Retro takes the look worn by Dale Hawerchuk and gives it a twist combining the heritage plane crest and “Winnipeg” lettering with the updated Jets colors. 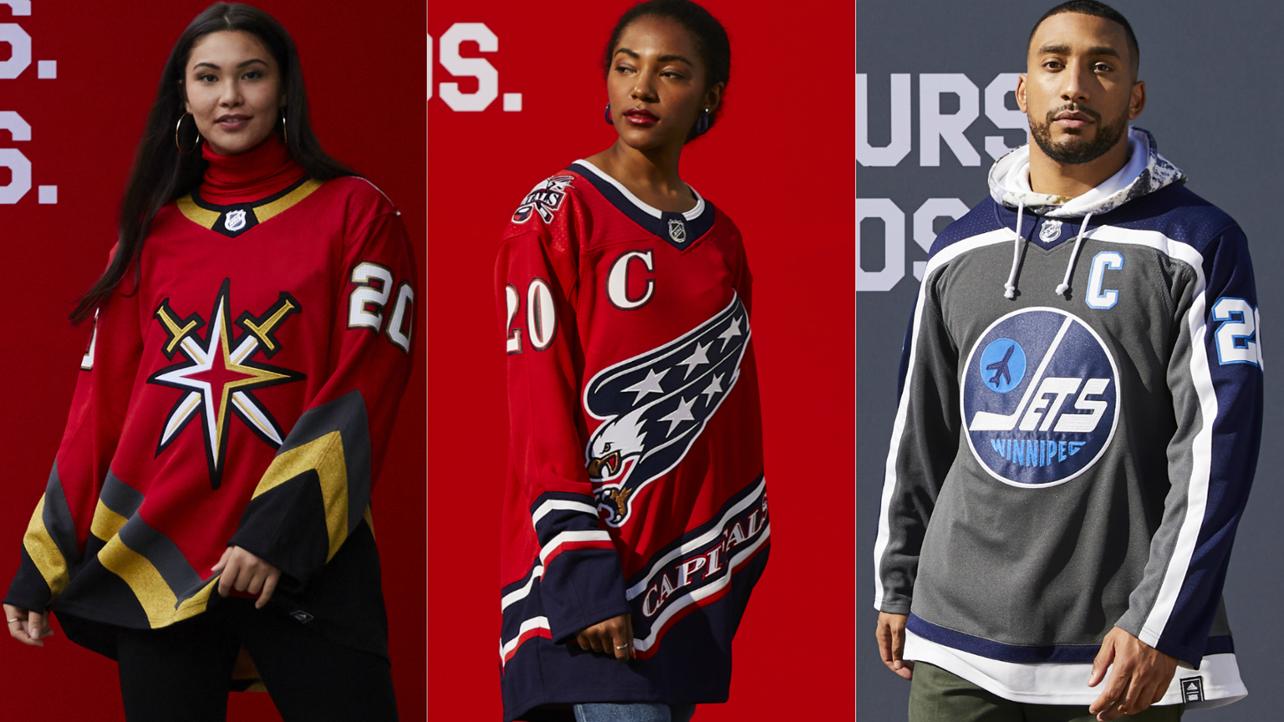