A Day In the Life

You may have heard the saying, “he lives at the rink” at some point in your hockey playing/watching/reading career. The Western Hockey League’s Red Deer Rebels will be taking that aphorism to new heights during this season.

All players belonging to the the Rebels’ roster will be spending the duration of the shortened 2020-21 WHL season at the Westerner Park Centrium. Yes, the full duration.

“In 20 years they can sit back and say this is what they had to do to get back to playing hockey after COVID,” Rebels head coach/GM Brent Sutter said. “It’s a once in a lifetime thing that they’re doing.”

As opposed to living with their families (if at a close enough proximity) or with billet families for the season, Rebels forwards, defencemen and goaltenders will be setting up shop at the rink. In an idea proposed by arena staff, the players will reside in the suites wrapping around the mid-bowl of the venue.

“The kids are in a closed environment and we have beautiful suites in our rink,” Sutter continued. “With our concourse being so big we can set up a lot of stuff like games and can move our weight room upstairs. We have lots of dressing rooms downstairs so we can space everyone out, even for the visiting teams. They’ll have their own portion of the rink to themselves.” 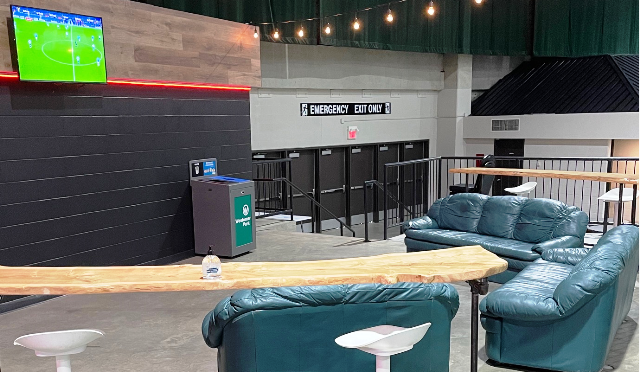 With fans not permitted into the arena this season, the team’s management staff has been able to brainstorm an idea that will see players safely remain isolated in a ‘bubble’ atmosphere within the confines of the Centrium. The five Alberta-based teams within the WHL will solely play against one another in the shortened 24-game season. Travel will occur only to and from the rinks.

“Ultimately, at the end of the day it’s all about the players,” Sutter added. “We had good talks with them about what they wanted to do whether it was a hotel environment, billets or this. They by far wanted this because they can hang out and be with one another while they follow social distancing and wear masks. They’re constantly being COVID tested. They thought it was best for them mentally.”

During their off-time, players will be able to participate in team-building activities such as ping pong and basketball (as tables and nets have been setup throughout the concourse). Workouts and school work will be encouraged, while wifi and meals will be readily available to all players.

The players have been self-isolating since January 30 and and are currently in a nearby hotel until able to get fully settled in in their new living quarters at the arena. 19 of Red Deer’s 25 players are returnees from the 2019-20 season. The season is set to begin on February 26.

“We’re doing everything we’ve been told we need to do by the health ministry and our government,” Sutter said. “They’ve actually been awesome to work with during this whole process. I can’t thank everybody enough, to be honest… It’s been a lot of work by a lot of different people to get it to this point. It’s been a long process, but it’s about health and safety. The situation we’re in now is as safe as any situation can be and it’s gone over very well.”

The WHL has announced the first two weeks of the Central Division schedule, which is as follows:

More in A Day In the Life